Give DeKalb County 2022 Sets New Record With Over $1.5 million Raised

The DeKalb County Community Foundation is honored to announce that the Jeffrey A. Trail Memorial Scholarship is currently accepting applications. The scholarship provides support to pay down the Advance for Clothing and Equipment (ACE) loan and/or offset any additional debt incurred as a student at the United States Naval Academy in Annapolis, Maryland.

The recipient will be selected before their first year in the Academy and will receive $5,000 over four years of active enrollment in the Naval Academy. Students are encouraged to review the scholarship guidelines prior to applying. The deadline to apply is July 31, 2022. 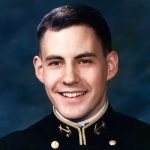 Jeffrey A. Trail was the son of Stanley M. and the late B. Ann Trail. He was born in DeKalb, IL, on February 25, 1969. Jeff spent his formative years in DeKalb and graduated from DeKalb High School in 1987. During Jeff’s senior year at DeKalb High School, he applied for admission to the United States Naval Academy. His application was initially denied because of a suspected asthmatic condition. He appealed the decision and continued knocking on the door until they let him in. Jeff entered the Academy on July 1, 1987, formally appointed by Senator Paul Simon. In his last year, he was promoted to Fourth Battalion Adjutant. Jeff greatly valued his years at the Academy and in June 1991, he graduated and was commissioned to Ensign in the United States Navy. Jeff continued his professional military career until June 1995. He was department head and promoted to Lieutenant at the Assault Craft Unit One at the Naval Amphibious Base in Coronado, CA.

Learn more about the Jeffrey A. Trail Memorial Scholarship >