Together, for DeKalb County – The Howard and Mildred Eychaner Fund

Together, for DeKalb County – The Howard and Mildred Eychaner Fund

The DeKalb County Community Foundation is pleased to announce the Howard and Mildred Eychaner Fund. The Fund was initially established in 2003 as a charitable remainder annuity trust. In 2021, their gift became available for grantmaking. The Fund supports needs and opportunities in DeKalb Township, with priority to projects related to health care and affordable housing. The entire balance of more than $250,000 will be expended within the next ten years.

Increasing the giving capacity of the Promise Grant – Subvencion de Promesa program is the first use of the Eychaner Fund. Promise Grants support the needs of the underserved and often dismissed populations in DeKalb County. The purpose of Promise Grants is to inspire, educate, and empower individuals who may experience extraordinary challenges due to their ethnicity, immigration status, and abilities.

“My parents always wanted to help folks who are making an effort to help themselves,” said their son, Jim Eychaner. “If there are determined people in DeKalb Township, facing difficult and often unfair challenges, that’s where my parents would help.”

About Howard and Mildred Eychaner 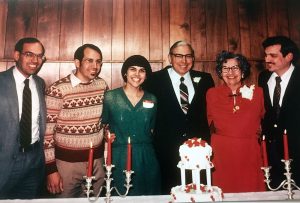 Howard and Mildred (Milly) Eychaner were beloved DeKalb community members who spent their lives serving and advocating for others. They were children of the Great Depression and worked hard to make ends meet. Howard and Milly both grew up on farms and attended one-room schoolhouses. Milly’s family were tenant farmers who moved frequently. Howard’s family farmed just east of Maple Park, but in 1927 after commodity prices crashed, they could no longer pay the mortgage and had to relocate to DeKalb.

In 1937, Milly moved to DeKalb to study home economics at Northern Illinois University (NIU). Howard had also attended NIU but dropped out after a semester hoping to earn enough to return, but that didn’t happen. The pair met at Epworth League, a group for young adults at DeKalb’s First Methodist Church. Milly graduated with a bachelor’s degree in 1941 and began teaching home economics in Serena, IL. The couple married soon after, in February of 1942. Howard operated the Eychaner Delivery service, which later evolved into Blue Van and Storage locally and eventually was part of Allied Van Lines nationally.

Milly served on the DeKalb School Board for 21 years and was president for three years. She supported migrant families by donating food, clothing, and friendship. Milly was a member of the City of DeKalb Planning Commission and was president of the United Methodist Women.

When a former pastor at First Methodist was assigned to create the Wesley Willows Retirement Center in Rockford, he asked Howard to join the board of directors.  Howard’s experience there was essential to the later group that organized to create the DeKalb Area Retirement Center (Oak Crest) in 1978, for which Howard was the founding president. In 2004, Oak Crest opened the Howard and Mildred Eychaner Health Care Center, where a plaque reads, “Their public leadership and private kindnesses blessed countless people. May their example encourage you this day to live a life of service with a heart full of joy.”

“They were generous of spirit both toward individuals and their community, yet never extravagant for themselves,” said Jim Eychaner.

Parents and Friends of Lesbians and Gays

Milly and Howard had an intense commitment to the full inclusion of LGBTQ people in society and the United Methodist Church. In the 1980s, early in the AIDS epidemic, the couple founded the Northern Illinois chapter of Parents and Friends of Lesbians and Gays (Northern Illinois PFLAG). Milly volunteered to work with hospice specifically to serve young men who were dying of AIDS yet abandoned by their families. The Eychaners were “tireless in their encouragement, support, and advocacy,” according to a remembrance by Kathryn Mitchem in the newsletter of Affirmation, a Methodist-related advocacy group.

The National PFLAG office in Washington, D.C. awarded Howard and Milly the first Pioneer Family Award in 2002. The couple passed away three years later in 2005. In 2012, on what was to be their 70th wedding anniversary, the office dedicated a conference room to them. A plaque next to the room reads, “Howard and Milly Eychaner showed the rest of us what PFLAG parents can do. Together they learned about the issues at conferences, with Milly taking notes. Together they taught others what they had learned, with Howard using his index of resources. Together they founded a chapter in the heartland, DeKalb County, Illinois, where they inspired thousands to work for equality.”

The Howard and Mildred Eychaner Fund

“We are honored to be stewards of Howard and Mildred’s thoughtful gift, put into place nearly 20 years ago,” said Foundation Executive Director Dan Templin. “Their legacy of generosity and love, especially for those struggling for belonging in our community, comes to life through this Fund and the subsequent grants it will make.”

Multiple options are available for those interested in creating their own legacy. To learn more, please contact Dan Templin at 815-748-5383 or dan@dekalbccf.org.