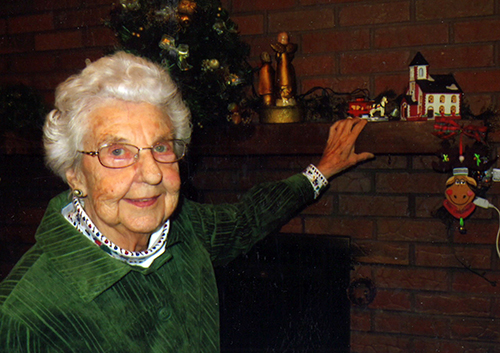 Introducing the M. Joan Popp Women’s Empowerment Fund for DAWC, a new agency fund with the DeKalb County Community Foundation. Created through an estate gift from Joan Popp upon her passing in September 2017, this fund provides support to the DeKalb Area Women’s Center (DAWC) and its mission.

Originally from Middleton, Ohio, Joan Popp grew up during the Great Depression. As a young girl, her father taught her how to play tennis and her love for that sport among others continued throughout her life. In 1952, she received a B.S. in Physical Education from Miami University in Ohio. Soon after she began teaching and eventually made her way to Northern Illinois University where she was a professor for the next 36 years. Dr. Popp served on numerous department, college, and university committees and held many offices including President of Northern Illinois University Annuitants Association. During her career, she received many awards and honors. In 1992, she was named Physical Education Teacher of the Year from the Northern District of the Illinois HPERD Association.

Dr. Popp was blessed with friends, a great faith and a true love of God, people and animals. She was thankful for all that she had with the core appreciation of life having struggles during the Great Depression and World War II. She gave back generously because she received opportunities in her journey. Speaking on behalf of the members of the DAWC, Anna Marie Coveny expressed, “We miss Joan and her involvement in women’s issues – national, state, and local. She was invested in the advocacy work of the DeKalb Area Women’s Center from the time of her own mother’s 1995 Art Exhibit through the many years of financial support and policy-making on the DAWC Board of Directors. As she planned for the future, hers and ours, the DAWC is an ever so grateful recipient of her bequest.”

Donations to any fund at the Community Foundation, including the M. Joan Popp Women’s Empowerment Fund for DAWC, can be made online, or by mail to the DeKalb County Community Foundation, 475 DeKalb Avenue, Sycamore, IL 60178. For questions or additional information on funds, please contact Executive Director Dan Templin at 815-748-5383 or dan@dekalbccf.org.