Economic Development Planning Progresses One Community at a Time 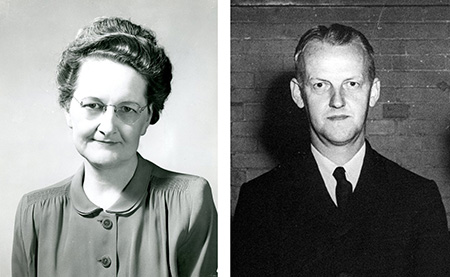 The DeKalb County Community Foundation is pleased to announce a new agency fund, the Endowment Fund in Honor of Edna L. Nelson & Kenneth A. Johnson. Created by Yvonne Johnson and First Lutheran Church of DeKalb, this fund will provide support for the purchase of children’s Bibles, expenses associated with Vacation Bible School, and/or other Christian education programming for children and youth in the congregation.

Edna L. Nelson was born in DeKalb in 1893. She was one of three daughters born to Andrew and Ida Nelson. Her dad was a wagon maker and built one of the first fire wagons for DeKalb. Edna began work for DeKalb AgResearch in 1930 working in the old schoolhouse on North Fifth Street in DeKalb. She became assistant treasurer until her retirement in 1957. At this time, she became the caretaker of Lavinia, her sister who had multiple sclerosis. Edna was a lifelong member of First Lutheran Church. She passed away in 1966, leaving behind a gift to start a fund at the church. Ken Johnson carries out a routine inspection at the chicken hatchery.

Kenneth A. Johnson (nephew of Edna) was born in DeKalb in 1916. He was the son of Albert and Virginia Johnson. Ken had two sisters Elaine V. Olson and Yvonne. Ken began working with DeKalb AgResearch in 1937, spending most of his working years in Sycamore at the old Armory on State Street. There he built fair displays, assisted in the mailing of “Acres of Gold” and planted field plots in the Midwest. In 1944, Ken became hatchery manager and continued in this role until 1971 when he retired and opened the El Matador Restaurant in Sycamore. Ken passed away in 1994 from pancreatic cancer. Ken was also a lifelong member of First Lutheran Church and upon his passing, a gift to the church was left in his memory.

As a lifelong member of First Lutheran Church and caretaker of her family estate, Yvonne approached the church about combining the gifts left by her aunt and brother to create a single fund. As a former teacher and a passion for learning, Yvonne proposed using the fund to support education in the children’s program. Through an endowed agency fund at the Community Foundation, this fund would provide annual support for the children’s ministry, freeing the church from the administrative and investment burdens of managing a fund.

“Ministry with and for children has long been a high value for First Lutheran Church,” said Pastor Janet Hunt. “We are so grateful for this ongoing gift. It will help to ensure that programing for children and youth continues far into the future!”

The Endowment Fund in Honor of Edna L. Nelson & Kenneth A. Johnson is the second agency fund providing support to a faith-based organization in DeKalb County.

“We are honored to partner with First Lutheran Church of DeKalb as co-stewards of these resources that will benefit generations of its congregation’s children and youth to come”, stated Dan Templin, Community Foundation Executive Director. “The Community Foundation serves as a trusted local partner for churches that wish to have an endowment fund that can grow in value over time while making an annual distribution in support of the ministry of the church.”

Agency funds are a simple yet powerful solution for any nonprofit organization to consider. Allowing them to diversify revenue and attract future gifts. The Community Foundation handles administrative and investment responsibilities, freeing the organization to pursue its charitable mission. For additional information, or to discuss creating a fund, please contact Executive Director Dan Templin at 815-748-5383 or dan@dekalbccf.org.