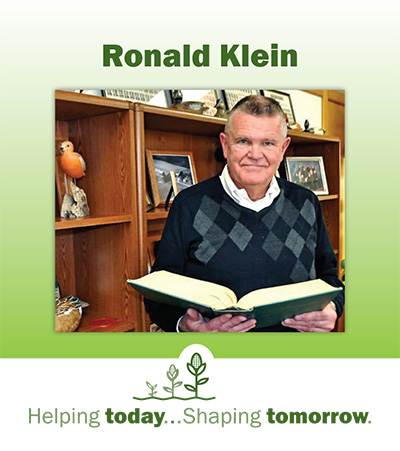 Ronald Klein grew up on the family farm in Hinckley, IL. As with any child, Ron had big dreams. He dreamed of attending the University of Illinois, serving his country as a Marine, and speaking up for others by becoming a lawyer. Shortly after high school Ron went on to attend the University of Illinois, graduating in 1963 with a law degree. Following graduation, he pursued his desire to serve his country as a Marine, climbing the ranks to captain in just a short while. He continued his practice of law as a Marine, handling many court martial cases overseas. Ron ended his service with the Marines in 1966 and moved back to DeKalb County, IL, to pursue a legal career in his hometown.

Shortly after arriving home from the Marines, Ron joined a local law firm, putting his knowledge and relationships in DeKalb County to work. Some 50 years later Ron is still practicing law part time (of counsel)  with the firm he founded –  Klein, Stoddard, Buck & Lewis, LLC, located in Sycamore, IL.

Ron has established a few different charitable funds with the Community Foundation over the years. Each of the funds match his philanthropic goals in specific areas of interest in DeKalb County.

“Oftentimes people want to give back to the community by donating a substantial amount of money. I like to suggest working with the Community Foundation,” said Ron. “The Foundation can oversee the money, handle the investments and paperwork, and most importantly, work with donors to align it with their charitable interests in the community. It’s that simple.”

Upon Ron’s ‘retirement’ from legal practice in December 2013, the Community Foundation Board of Directors and staff created the Ronald G. Klein Community Fund to honor him and his many accomplishments. This undesignated fund (community impact fund) is a fitting tribute to Ron’s role in the story of the Foundation, as well as his influence throughout the County. Grants from this fund allow the Community Foundation Board of Directors to ‘give where it’s needed most’ throughout DeKalb County.

If ‘giving where it’s needed most’ inspires you, consider making a gift to the Ronald G. Klein Community Fund or start a community impact fund of your own. For questions or more information, please contact Executive Director Dan Templin at 815-748-5383 or dan@dekalbccf.org.