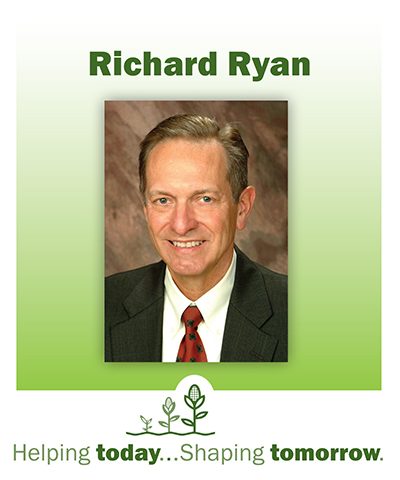 Pictured: Local philanthropist and friend of the Community Foundation, Richard Ryan of DeKalb.

Meet Richard Ryan. Longtime DeKalb County resident and local philanthropist. Raised on a grain and livestock farm in downstate Illinois, Richard understands the value of teamwork and providing for others.

Shortly after graduating high school, Richard went on study at Quincy College, University of Chicago and Stanford—primarily in Economics and Finance. After graduation, he served time in the U.S. Army as a finance officer in Vietnam and from there went on to hold financial management positions in Chicago. He moved to DeKalb County in 1979 where he took a position with DeKalb Genetics, leader in hybrid corn development. Richard spent the remainder of his career in different roles with DeKalb Genetics, eventually becoming the president and chief cooperating officer. He stayed through the merger of DeKalb Genetics and Monsanto in 1998, retiring from Monsanto in December 2001.

During his time with DeKalb Genetics Richard got to know Charlie Roberts, son-in-law of the company’s founder, Tom Roberts Senior. Charlie and his wife Mary were well known for their high integrity, great values, and genuine love for others. This love of others spilled over into their charitable interests for DeKalb County. Richard admired the Roberts for the way they selflessly gave back.

In the early 90’s Richard was invited to lunch at the Kishwaukee Country Club where he and Charlie discussed this idea of a Community Foundation, a new concept at the time. Charlie had recently attended a conference about Community Foundations and thought the concept was a great fit for DeKalb County. After some discussion and planning, this idea came to fruition in 1993 when Charlie and Mary Roberts made a founding gift to start the DeKalb County Community Foundation. “I never forgot that day,” exclaimed Richard in a recent interview, “nor have I forgotten Charlie and Mary’s exceptional generosity.” In September of 1999 Richard created his first donor fund at the Community Foundation, the Ryan Family Education Fund for St. Mary School DeKalb. This fund provides ongoing scholarship support for education expenses of at least four students at St. Mary. Richard makes time each and every grant cycle to personally meet the new scholarship recipients and learn more about their ideas for the future.

In 2005 upon the passing of Charlie Roberts, Richard made a gift to the Community Foundation to inspire others to give. This generous gift started a fund in memory of his friend Charlie. The Community Stewardship Fund in Memory of Charles C. Roberts, created as an endowed undesignated fund, would provide ongoing financial support in the community where it’s needed most. This idea of an undesignated fund is consistent with the initial gift from the Roberts, allowing the Foundation Board to respond to needs and opportunities throughout DeKalb County for generations to come.

Fast forward to present day and one will see the continued generosity of Richard Ryan in motion. His ongoing support of local organizations and ideas creates new opportunity for people of all ages.

At the Community Foundation we are thankful to Richard and donors alike for their understanding of community and love for the people of DeKalb County. To “give where it’s needed most” plays an important part in meeting the needs of this place we call home.

There are a many ways to be a philanthropist in DeKalb County. If “giving where it’s needed most” inspires you, consider making a gift to an existing undesignated fund or start one of your own. If you have questions, wish to make a donation, or want to discuss your own ideas of philanthropy, we’re here to help! Please contact Executive Director Dan Templin at 815-748-5383 or dan@dekalbccf.org.

VIDEO – Richard Ryan speaks on undesignated funds during his presentation at the 2016 Friends of the Foundation event.