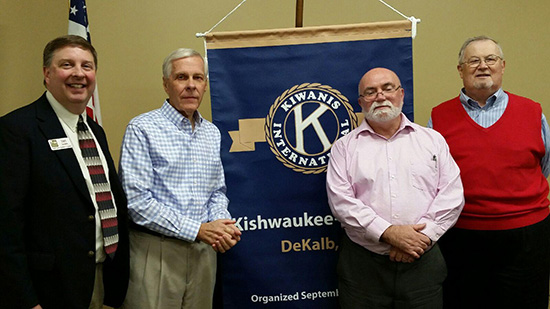 Recently, the DeKalb County Community Foundation staff were invited to a monthly meeting of the Kishwaukee Kiwanis Club of DeKalb, IL.

During the meeting, an award ceremony took place to honor long-standing members of the Club for exemplary leadership and service. As part of the award, a donation was made in the recipients’ names to the Kishwaukee Kiwanis Club CommunityWorks Endowment Fund, a component fund at the Community Foundation that provides grant dollars in support of its work in the areas of early care and education, land use, and workforce development. Contributions to this fund are made annually through the Leadership and Service Award ceremony. 2016 award recipients were Jerry Smith (former Community Foundation Executive Director) and Jerry Wahlstrom.

Thank you to the Kishwaukee Kiwanis Club for partnering with us in their philanthropy. Through the power of endowment, annual contributions to their existing Funds allow for even greater impact in the future. Helping today…Shaping tomorrow.