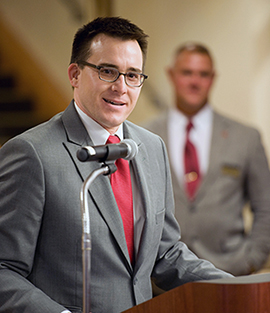 Ben Bingle grew up in Polo, Illinois—a small farming community in Ogle County. He graduated from Monmouth College in 2002 with a double major in business administration and political science. Wanting to combine these disciplines while pursuing a socially-responsible career path, he served two years as an AmeriCorps member working in small business development for low-income and disadvantage populations in Iowa.

After completing his second AmeriCorps term, he was hired by a nonprofit organization to lead business development and technical assistance efforts on a national scale. Ben was promoted to Operations Officer where he directed and implemented a federally-funded self-employment initiative, collaboratively attained more than $1.3 million in grant, earmark, and contract funds, and managed grant programs that provided start-up capital to prospective business owners.

In 2008, he joined Northern Illinois University as a Research Associate, where he directed or co-directed 27 research projects in three years for clients from nonprofit organizations, municipalities, government agencies, and the private sector. Most recently, Ben worked with the NGOLD Center at NIU and in addition to his involvement with the nonprofit community, he also worked directly with students as a research mentor, academic advisor, and instructor. Since 2012, he has published nine book chapters and three peer-reviewed journal articles and will soon be defending his PhD dissertation.

Ben has served as a board member of the Ellwood House Association. He is also a member of Phi Alpha Alpha Honor Society for Public Administration, the Midwest Political Science Association, and the Council on Undergraduate Research. He earned his Master of Public Administration from Drake University and is currently completing his dissertation for a PhD in political science from NIU. He was awarded NIU’s Supportive Professional Staff Presidential Award for Excellence in 2015, Monmouth College’s Young Alumnus Award in 2014, and NIU’s Outstanding Graduate Student Award in 2014.